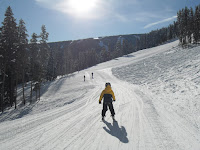 Challenge Day: 12
Today I went on my very first ski trip, well it was actually my son's school ski trip, but I went along as a chaperon. We went to Paoli Peaks, IN, the closest ski "resort" to our home in Louisville. At first I was a bit nervous because my 6 year old son was going out to the slopes to take lessons and then he would be set free to ski all on his own. I was able to attend the class with him and watch. I actually called my husband, at one point, to tell him that I thought our son was a bit uncoordinated and I didn't think he was going to get it. My husband just said, encourage him!
So after, what seem to be an eternity, he was finally done with his class and was progressing more and more. Just as I was beginning to be comfortable with the fact that my son was skiing, the instructor said they had to learn how to go on the ski lift. What? My baby is going to go on that unsafe contraption all by himself? What if he falls off? What then? The instructor went with him the first time, and the next few times he went with someone older from his school.
Though he learned the skiing part quite well and ended up being very much coordinated after all, the ski lift was not so much his thing. Try after try he just couldn't get the hang of it. Every time he got to the top he wasn't able to jump off. At one point he got ran over by the ski lift chair, he was okay though. On his last run down the hill, I had him remove his skis and walk up with me. He turn to me and said, "mom this was so much fun, I'm so glad you let me come." Though I didn't get to ski, it was the greatest ski trip I will ever probably be on, because it was wonderful to see my son having a blast learning something new.