Showing posts from May, 2010
Show all

Pamper Yourself, It's Good for the Soul 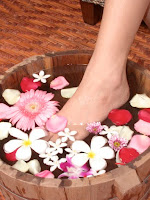 When I was single I was thin, fashionable, and diluted enough to think that the day that I became a mom I would look the same way. From my own mom to other stay at home moms that I knew, they all seemed to not care about their appearance. With all the time they spent at home, why couldn't they take the time to look good and care about themselves. "When I become a mom I am not going to let my self look like that." Well, I have become that stay at home mom that I criticized. I look at myself now and think why should I bother getting dressed up, doing in my hair and putting on makeup? I'm over weight and my clothes don't fit. Now this is not a pity party for me, I've allowed myself to get like this and I have to do something about it. But I think I now understand why stay at home moms don't look their best, it's hard. It's hard to get up in the morning and have the motivation to get yourself all dolled up, for who and why? You are around your kids al
Post a Comment
Read more 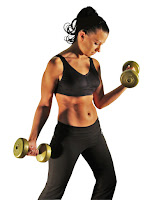 I have hit a bump on the road to fitness. In March I began to get discouraged about the fact that I had not lost any weight. Is the video not working, am I doing something wrong? I reduced my food portions and cut down on sweets, so what was the problem? The video does work, my friend Diana started working out just a couple days after me and when I last talked to her back at the beginning of April she had already lost 21 pounds. Both Diana and my husband helped me realize that it's about consistency and working out more days. I was not going to see results working out 3-4 days a week, especially with all the weight I have on. The week after Valentine's Day I got sick and I wasn't working out on a regular basis. It took me almost a month to get better as I was diagnosed with bronchitis and it took about a week after that for the antibiotics to make me better. I was going to begin working out 5-6 days a week after Easter weekend. Then after my husband's birthday party, t
Post a Comment
Read more

This year my husband celebrates his 30th year of life. On April 18th I threw him an 80's themed party, fit for a man born and raised in the 80's. The hall was decorated in neon colors and balloons. I made posters that represented the 80's, Movies, Songs, Iconic Things, and a Pac Man Happy Birthday sign. The hall was sectioned into 4 areas. The first was a mini movie theater where you could catch the classic film Back to the Future . The second was the arcade, I had two old televisions set up with Pac Man and Atari. Third was the gaming area, where you could challenge a player to a game of Ping Pong or Foosball. Last was the food court, serving nachos, cheese puffs and of course fruit punch Kool-Aid. At the center on each table was a boom box and 80's candy such as fun dips, pixie stix, and blow pops. I had an 80's cake made with my husband's picture on it of when he was 5 years old. Around the cake table I had 80's toys that my husband and I still ha
Post a Comment
Read more

April came and went much quicker than March did. I lost track of time and didn't even post a single blog, so much for writing more in a April. There were things that kept me busy this month that are worth blogging about and the first is the family drama from my husband's extended family. Every family has their issues, but I must say my family's issues pale in comparison to the drama that my husband's extended family has put in the works. It's extremely sad and terrible when family chooses to create conflict instead of helping one another out. My mother in law passed away in September of 2009. She had nothing when she passed away, leaving my husband and I responsible for her funeral expenses. That wasn't something that we had ability or funds to take on. Everyone in her family put in their two cents about how to put her to rest, but when it came down to what really mattered, how to pay for all those expenses, no one stepped up to the plate. They were as
Post a Comment
Read more
More posts