- July 22, 2019
La Isla del Encanto… the island of enchantment… that is the popular name given to the island of Puerto
Rico. In summer of 2017 we visited Puerto Rico on our family vacation.. we spent 8 days on the island. 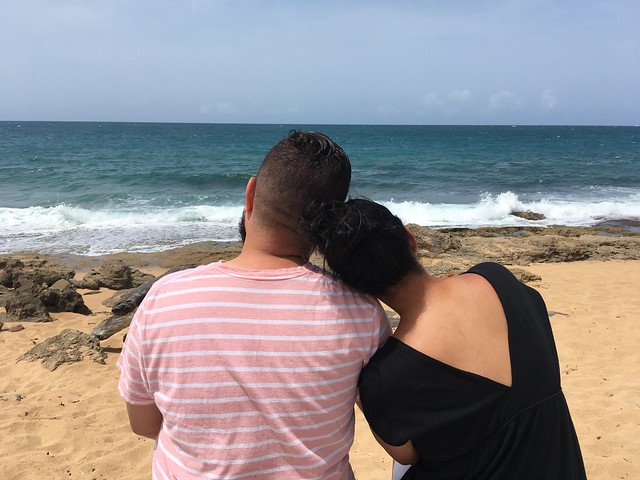 This was the first time my boys and I had been to PR. Tony used to spend his summers there, as a kid,
with his grandparents. I particularly enjoyed this trip because we had the opportunity to visit several
places during our stay.

We flew from Fort Lauderdale, FL to the capital city of San Juan, Puerto Rico. Shortly after arriving
we drove to the southwest central part of the island to visit Tony’s grandmother in the town of Adjuntas. 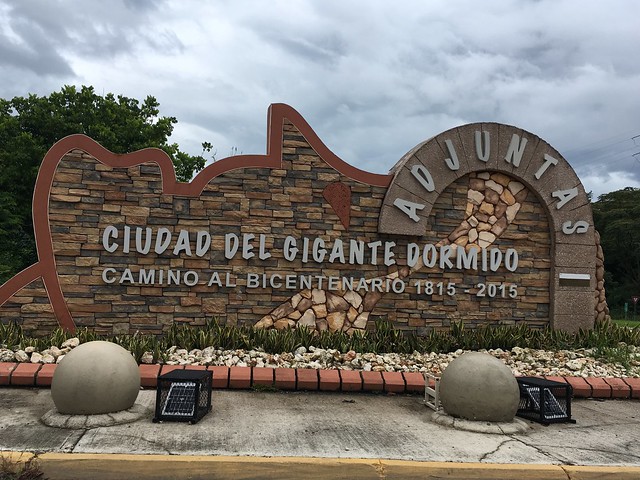 Adjuntas is known as the land of the sleeping giant because the mountain range looks like a giant
sleeping on his side.  It’s located in a mountainous range so the climate is mild. The days we were there
the weather was overcast and rainy, but pleasant because we didn’t experience much heat. It’s a small
quaint town. Grandma lives in the heart of the town right across from the plaza so there is a lot of
activity going on all day and night. 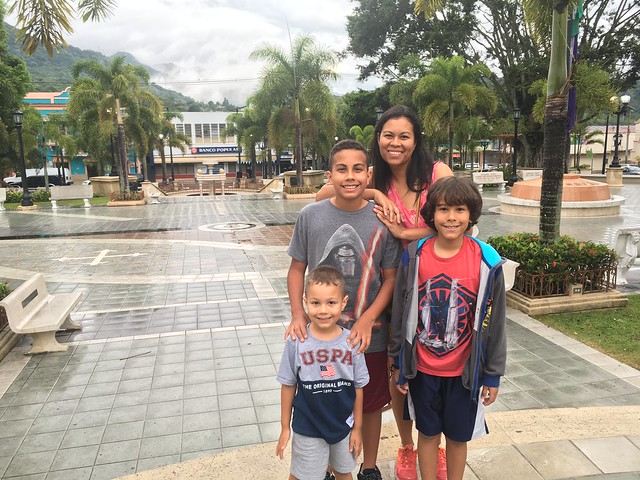 We really didn’t eat anything very authentic there, but we did find a pizzeria that sold a pizza called
the Mega Pizza. It was the biggest pizza I had ever seen! A gazillion pieces of a never ending pizza that
lasted for days. I think there was still some left in the fridge the day we left. 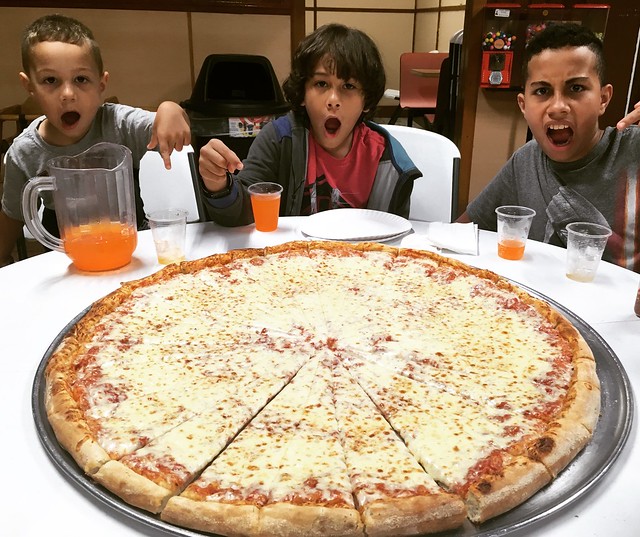 One of my highlights of visiting a latin country is hitting up the bakeries for freshly bake sweets. Every night we’d head downstairs to the corner bakery and buy pasties. We’d have one as a bedtime snack and one the next day for breakfast.

PONCE
During our stay in Adjuntas we drove south about 30 minutes to the city of Ponce.  That is where Tony’s
grandma is originally from. Ponce is the second largest city and is located on the southern coast of the island. The city is named for Juan Ponce de León y Loayza, the great-grandson of Spanish conquistador Ponce de Leon. Here are some of the places we visited...

King’s Ice Cream: When I was doing research of places to visit in PR, I found an ice cream shop
that everyone raved about. Lucky for us it was located in Ponce… so of course we stopped at King’s
Ice Cream. It was very yummy and just the thing to refresh you on a hot summer day. I had a parcha
(passion fruit) ice cream. 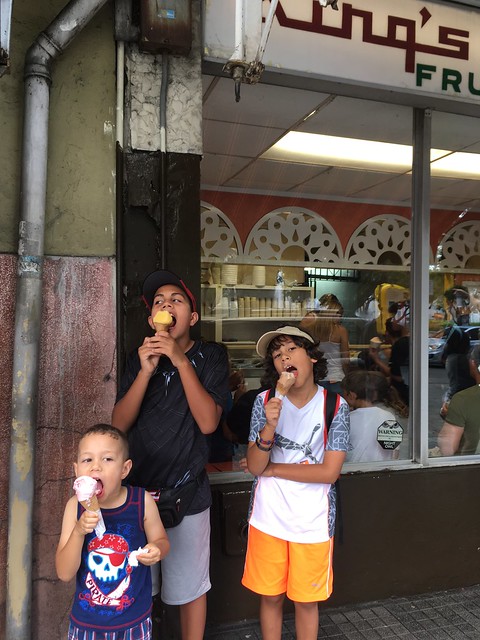 Parque de Bombas: Ponce is known for having a recognized landmark, it’s Parque de Bombas, it’s
a historic former fire station. It’s located at the Plaza Las Delicias town square. Originally it was built
as a pavilion for an exhibition in 1882 and later became Puerto Rico's first ever fire station. The station
closed in 1990 and was converted into a museum. 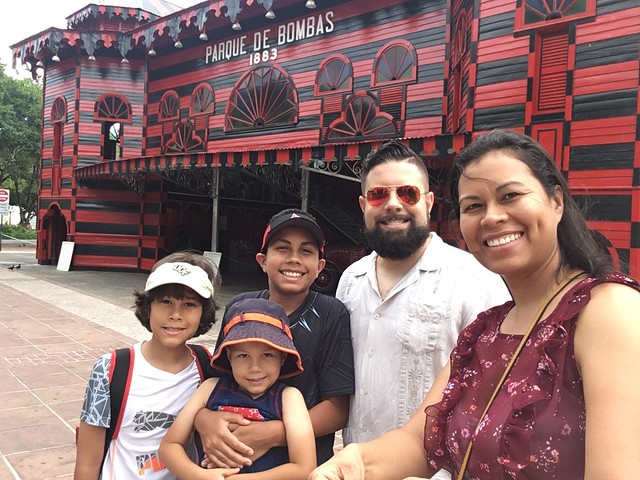 Plaza Las Delicias: is the main plaza in the city of Ponce. The plaza is famous for its fountains and
monuments. It is the main tourist attraction of the city. On the corner of the plaza I bought bunch of
quenepas... sweet Caribbean fruit. 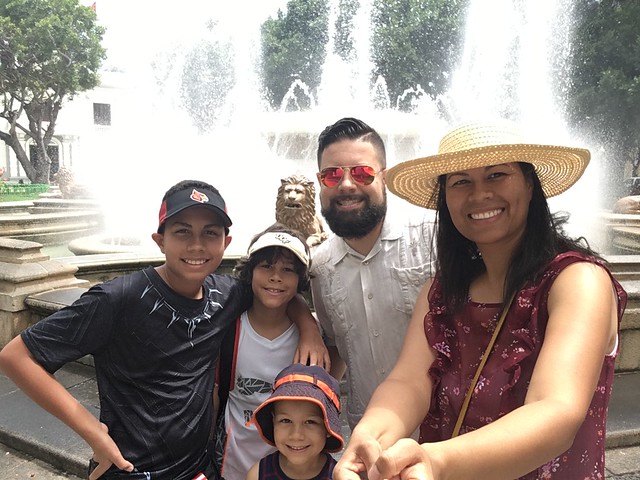 Paseo Tablado La Guancha: is a boardwalk in the La Guancha sector of the Playa barrio.

Castillo Serralles: This mansion sits on atop a mountain overlooking the city.  It was home to the
Serrallés family and later became a museum.

Cruceta del Vigía: Is a giant cross structure standing 100 feet tall, across from Museo Castillo
Serrallés. It‘s a tourist center and has a horizontal sky bridge that gives you a panoramic view of
Ponce and the Caribbean Sea.

After our time in Adjuntas we drove back to San Juan, we drove through the western side side of the
island this time. San Juan is where we were staying for the rest of our trip.  My brother was getting
married there so we had to head up for the wedding rehearsal and to check in to our hotel. The plan
after the rehearsal was to go to the city of Luquillo and visit  El Yunque.

LUQUILLO
Upon arriving in Luquillo we stopped at a long strip of buildings on the side of the road Route 3 along
the beach to eat called The Luquillo kioskos (kiosks) but don’t let the appearance discourage you from
stopping in at one of the kioskos. I got a coconut and then we ate a restaurant where we had authentic
Puerto Rican food, like mofongo. 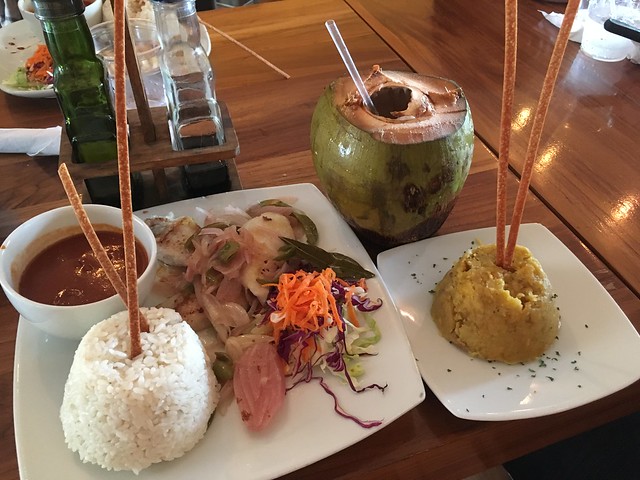 After lunch we made our way to El Yunque. El Yunque is a national rainforest located in the Sierra de
Luquillo mountains totally 28,000 acres. Because the rainforest is big and vast we only spent our time
in a small area and didn’t go deep into the forest.  We were in a big group since the majority of my
extended family was also there for the wedding. It was an amazing experience to be in such a huge area of nature. It's definitely a place you have to go and see for yourself in person. 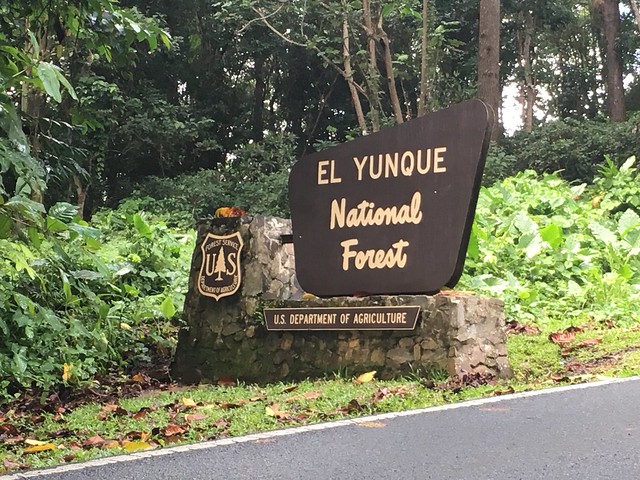 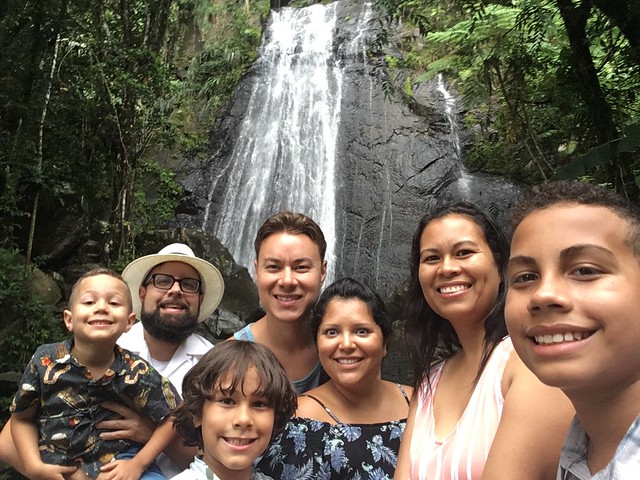 On Monday, after the wedding, we once again returned to Luquillo for a fun filled day at the beach.
That was the first time, believe it or not, that we had been to the beach during our stay in Puerto Rico.
I guess living in a state where we are surrounded by beaches, it's not always a top priority when on
vacation. But the beach was nice... tropical, clear, warm waters. 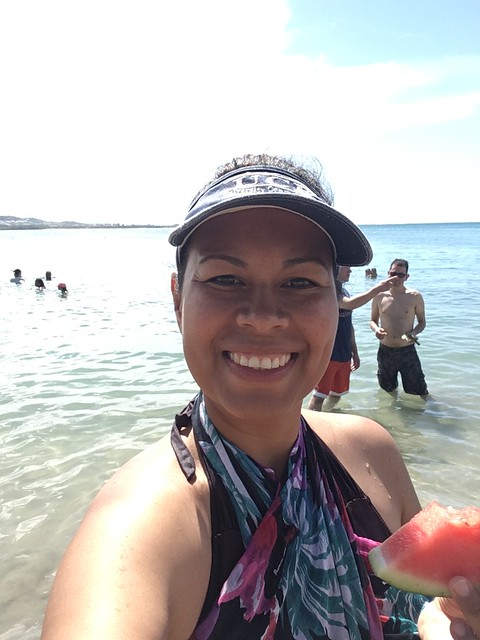 SAN JUAN
For the remainder of our trip we stayed in San Juan. We stayed at the Condado Plaza Hilton.
Beautiful hotel and location... 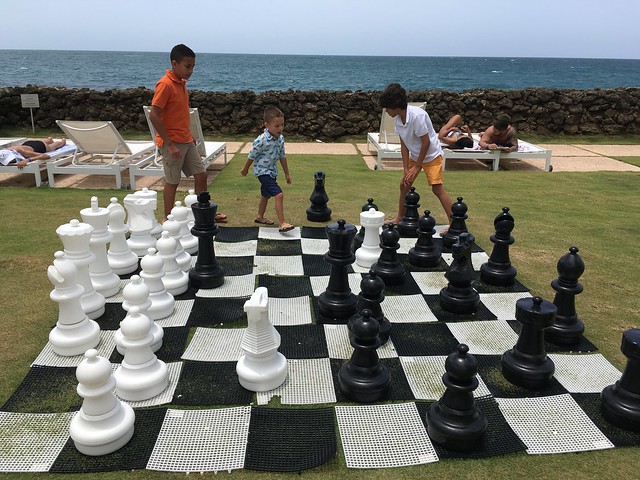 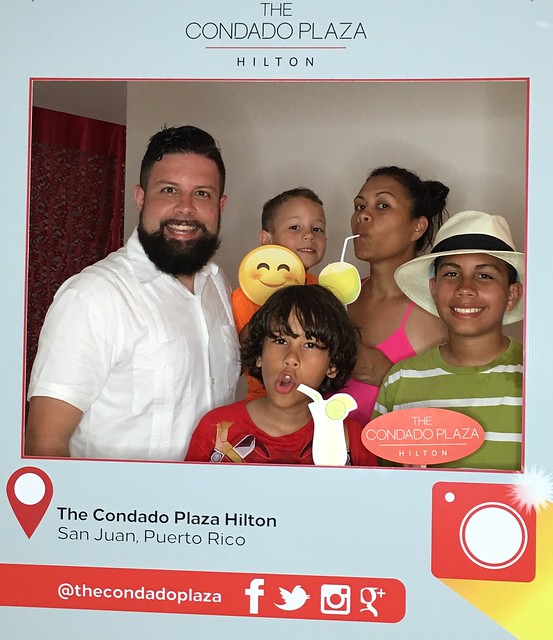 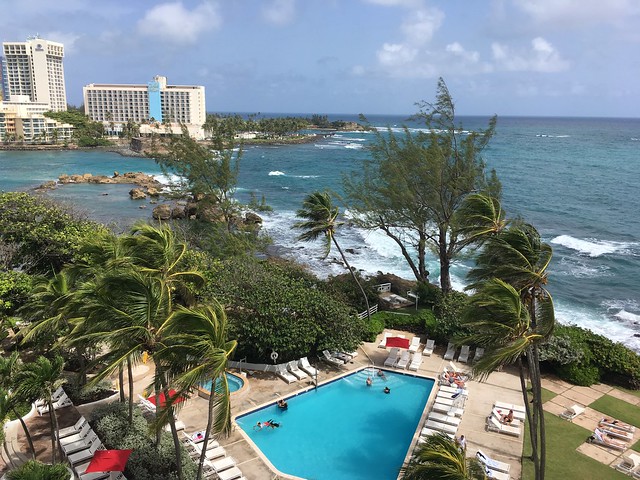 One of my favorite parts of San Juan was Old San Juan (Viejo San Juan)… the old European
architectural influences and the colors made it place to capture.  My brother and sister-in-law got
married in Casa España in Old San Juan. 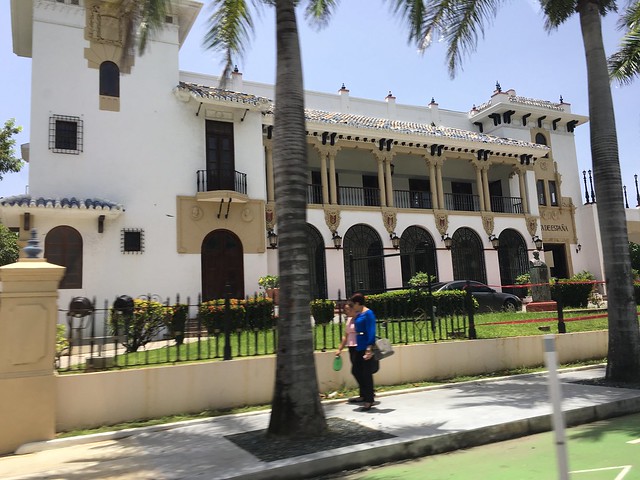 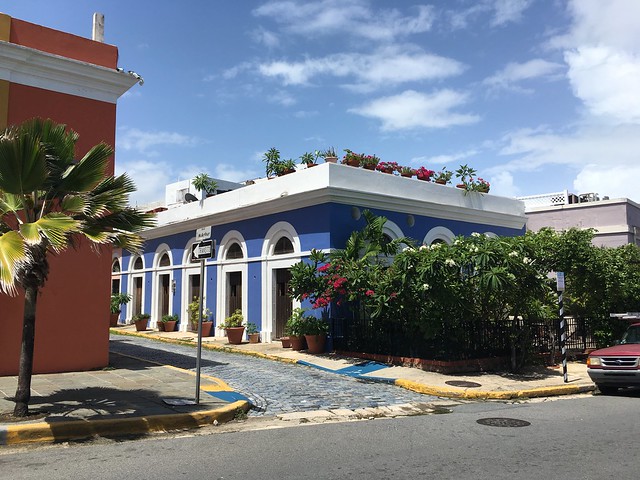 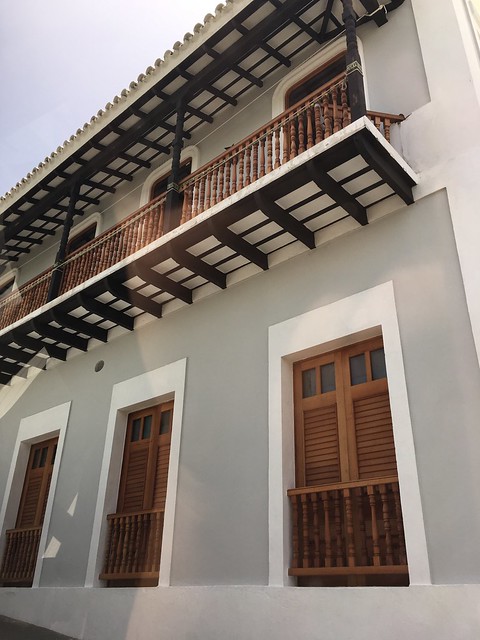 El Morro was amazing! We went to see it twice... on Saturday we took pictures as the sun was setting.  Because we didn’t get to spend much time that day, we spent our last morning there and were able to take a tour inside El Morro. As a history buff I enjoyed every minute of being inside and learning all about it’s history. 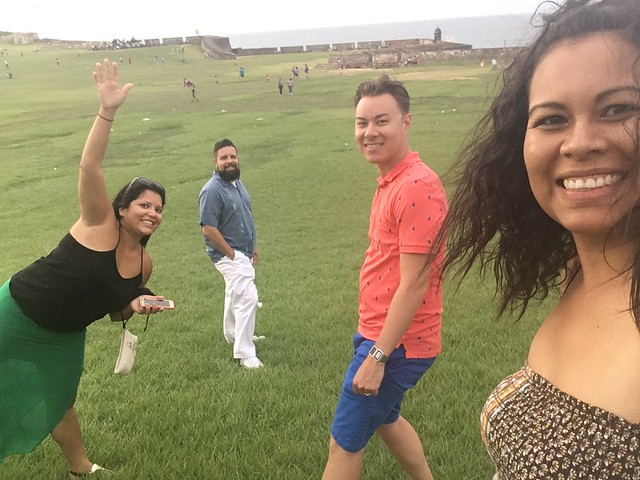 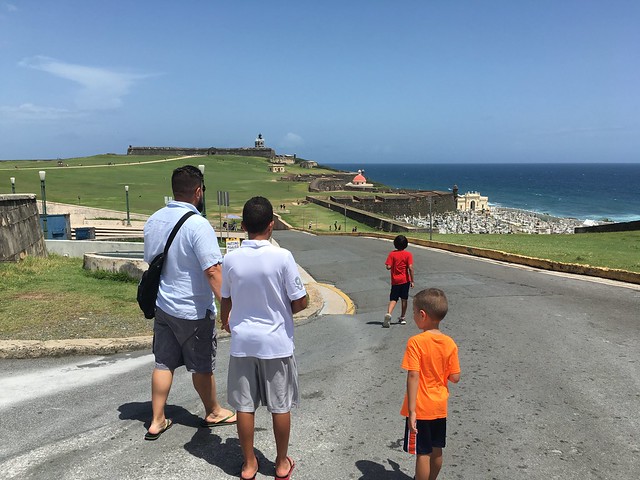 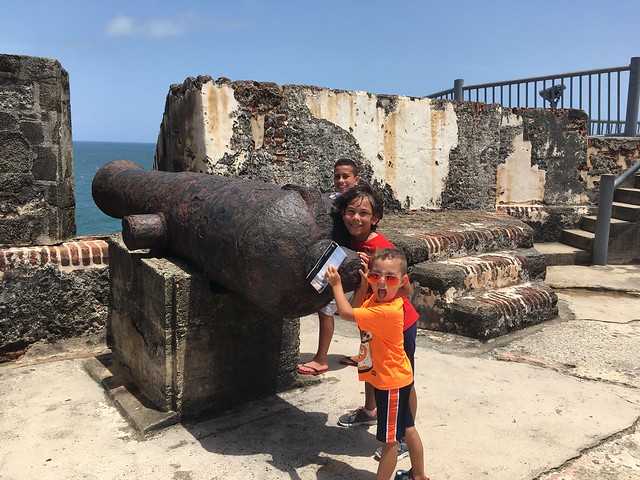 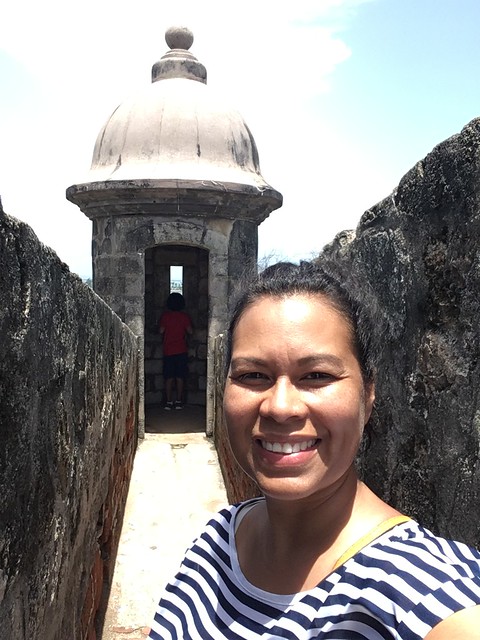 After our visit to El Morro, Tony and I had lunch at a quaint restaurant that overlooked the ocean.
As we had our mofongo with chicken, one last time, we enjoyed our lunch listening to the crashing
waves and the smell of sea breeze that came in through the open windows. 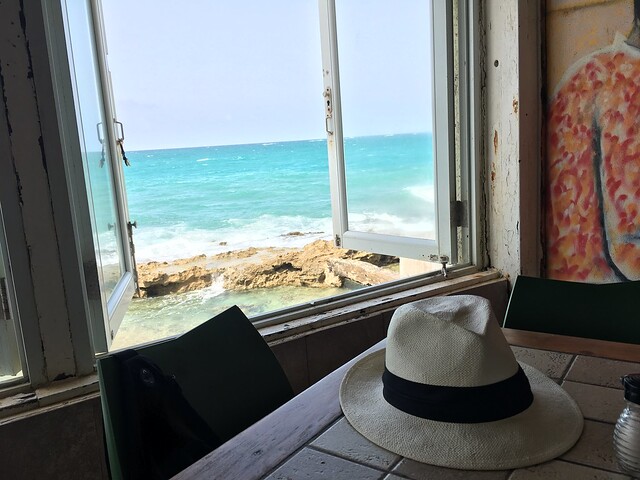 It was trip filled with many memories and wonderful moments... It was truly an enchanting vacation.
TRAVEL