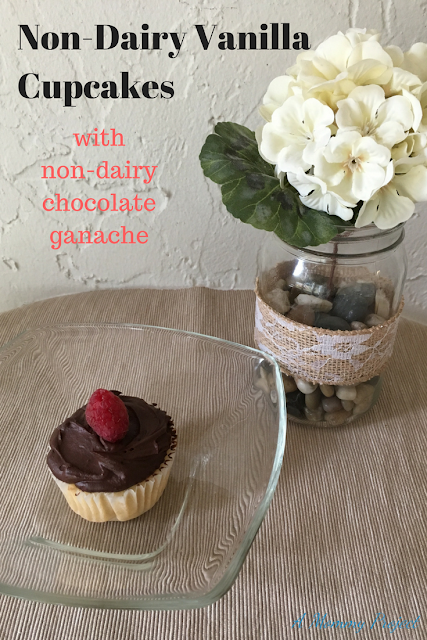 Last week, on Valentine's Day, I posted a picture of cupcakes I had made for my husband.  I want to share this simple and delicious recipe with you. What you don't know is that those are non-dairy cupcakes with a non dairy chocolate ganache.

A few years back, my cousin and his wife told told us they had become vegan because his wife suffered from very bad allergies, to the point that she was unable to breath at night. They found out that cutting dairy would help with the allergies, because dairy suppresses the ability to fight allergies.

My husband, who's allergies we just as bad and was on daily medication, decided to try it. So we cut dairy out of diet, and though it was difficult for him, because he loves, and when I mean loves I mean he is practically a cheese connoisseur, his allergies got better. They went away.

For years he took a daily pill to be able to function properly and now he was able to go about his life without medication.  It's true what they say... what you put into your body affects how it functions.

My oldest son also suffered from allergies when pollen was high.  On a daily basis he had a runny nose and he couldn't even go out to recess because his eyes would get red, watery, and swollen. He too did a 180 with the non-dairy diet and was once again able to be outside during allergy season. 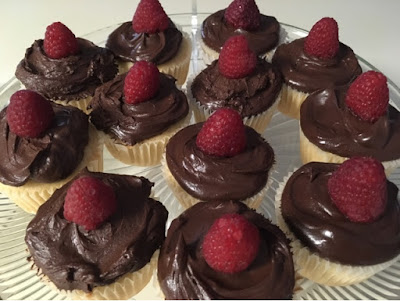 The thing is that when people hear the word "vegan" or non-dairy it is assumed that you can't eat good. No, that is far from the truth.  I have learned to cook so many yummy dishes that are vegan/non-dairy. In fact, you can take regular recipes and make them vegan.  In the case of the vanilla cupcakes, I took a basic vanilla cupcake recipe and substituted almond milk for milk, or whichever non-dairy milk you prefer.  As for the chocolate ganache, chocolate in it's purest form (cocoa bean) does not contain dairy. 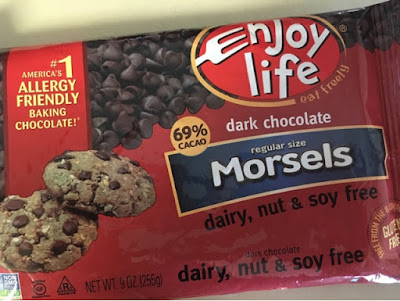 The cupcakes were quick and easy to make. Simply sift the flour baking soda, and salt in a bowl and set aside. In another bowl mix the butter, which should be at room temperature (leave it out prior to making) and the sugar until it's fluffy.

Add one egg at a time and make sure sure it's well incorporated. If you are a vegan that does not consume eggs click on the egg substitute link to find a variety of egg substitute.

Then add the vanilla and milk. Slowly add the flour mixture to the wet mix. Combine well and fold in the chocolate chips. The chocolate ganache is super simple too, it's half a bag of vegan chocolate chips, 1/2 a cup of warm almond milk (you can use whatever non-dairy milk you want), and vanilla. Whisk it until the ingredients are well combined and you have the chocolate soft smooth and creamy. Let it cool, I even put in the fridge for a few minutes to thicken a bit before applying it to the cupcakes. But don't leave it too long or it will solidify. 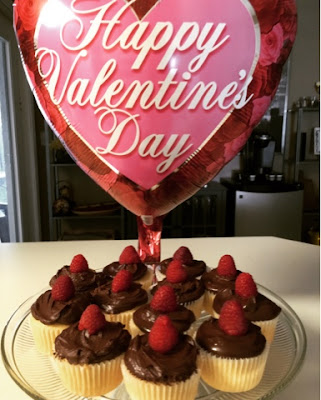 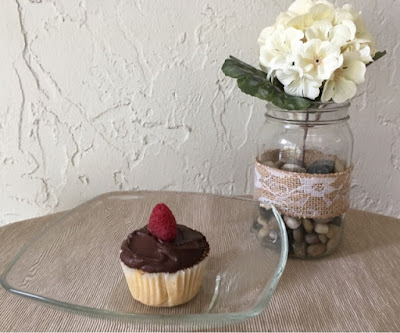 So whether you are vegan, want to cut dairy out of your diet, want healthier options, or just want to try something new, give this recipe a try. Good things can be yummy too. Enjoy!

INSTRUCTIONS
Preheat oven to 350 degrees. Line two muffin tins with cupcake liners. In a bowl sift flour, baking powder and salt together. In a mixer bowl, cream butter and sugar together for 5 minutes or until light and fluffy. Slowly add eggs one at a time until combined. Add the vanilla and almond milk to the mixture. Add the dry ingredients to the liquid mixture a little at a time. Fold the chocolate chips by hand. Pour batter into prepared pans and bake for 18 minutes or until a toothpick inserted into the center of a cupcake comes out clean. Cool pans completely on a wire rack.


Warm the almond milk and pour over the chocolate chips.  Whisk until the chocolate has completely melted and is creamy.  Add the salt and vanilla, set aside to cool.