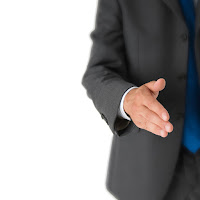 After being sucker punched last week I realized that the pieces of the puzzle didn't add up. Once I got over being sad that I was offered a job that was later retracted I began to think about why something like this would happen. I sent a follow up email with a few questions regarding the situation. They immediately contacted me to meet with the head of the department. I guess you could say I'm a glutton for punishment. Why would I go back to a company that made such a bad first impression? Honestly, I didn't want to, but this was my thought, I can go and possibly get the job, which I need, or I don't get it, in which case I have nothing to lose being that I never had the job to begin with.
My friends had been telling me that this job wasn't meant to be and that God had something better for me, so I had that in the back of my mind. On the way to the interview I asked God to show me if this was His will or not. I arrived at the company confident that I was going to impress the director and they were going to beg me to work for them. But as soon I met this person I realized this was going to be much tougher than any of my other interviews. He was cold, unfriendly, and I could tell he wasn't interested in meeting with me. As soon as I sat down I began what is most certainly the worst interview I have ever had.
This was definitely an interview to cover his and the companies butt for their so called "miscommunication". I wasn't there to show him what I had to offer the company and how I would be an asset to the department. I was there as a formality for the mistake they had made. The cynicism that he gave off and the questions that he asked were completely uncalled for. It's a good thing I have a back bone, because had he done this to someone with less tolerance for bullies, he would have had them in tears. I honestly wanted to tell him off. How dare you question my integrity! He asked me to come to this "interview" only to turn their mistake around on me and make me look like the bad guy because I stood up for myself! Total lack of professionalism, that's what that is!
My husband had previously said to me that I wouldn't want to work for a company that behaved in such a manner. I gave them a chance to prove otherwise, but my husband was right. As I left I wished him well and walked to the car confident that this was not a company I wanted to be a part of. God showed me that this was not what he had for me. Sadly, I was upset with God last week because of the situation. He knows what I need, why would he take that from me? But the truth is, He really does know what I need and He was telling me that He didn't want me working for a company that had no morals, integrity, or ethics. The Lord says in Jeremiah 29:11, For I know the plans I have for you...